Races in Medellín: A Runner’s Guide

As an amateur runner who has been jogging for many years, I’ve had the pleasure (usually!) of participating in a LOT of road races. So I was really happy when the awesome folks at Catalyst Weekly—an amazing event guide and website for Medellín—invited me to write a post on road races in the City of Eternal Spring. If you live in Medellín or are willing to travel to run (it’s a thing!), definitely check out this list. Registration dates are coming up fast!

For more running-related posts from me, click on “Browse by subject” in the column to the right, and navigate down to “Running”. If I had to choose one old one for you to read, it’d be this one—hopefully you’ll get a laugh out of my pain. 😉 Until next time….

So you’re thinking about moving abroad… 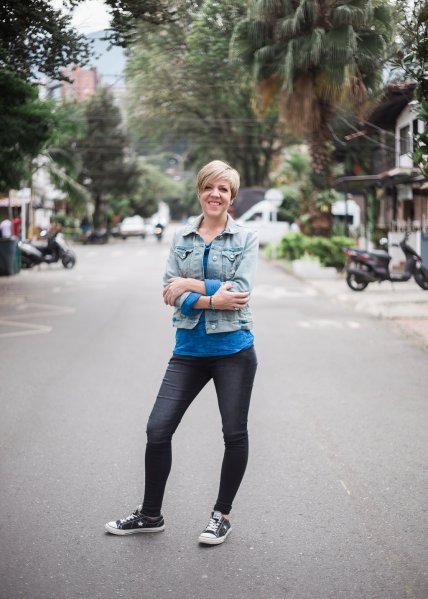 Now that I’ve lived in Colombia a few years, friends in the US sometimes ask for information as they contemplate whether an international move might be right for them. When I think back to my own decision process, I remember how hard it was to know what to expect and, later, to figure out logistics – finding movers, getting an apartment, lining up childcare, etc. My then-husband Gio and I probably relied a little too much on House Hunters International… no kidding!… but then again, we did end up on “Best of South America: Season 1“!

In spite of our TV fun, we would have benefited greatly from a website like ExpatFinder, dedicated to providing the information needed when preparing to make the leap abroad. In addition to helping you organize your move, ExpatFinder also gives you first-hand accounts of what to expect, via interviews with people living in various countries. I’m honored to be among them. Here, you’ll find my take on moving to and living in Colombia. Enjoy! And thanks, ExpatFinder, for this opportunity!

Posted in Making the Leap 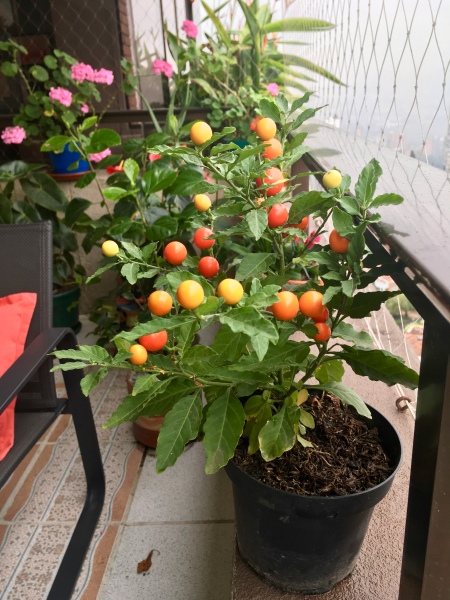 We humans consistently underestimate how much we’ll change in the next 10 years, according to a 2013 study. If we envision the world around us a decade from now, I think we’re likely to underestimate the changes there, too – with respect not only to technology, but also to the people around us.

As a foreigner living abroad, I sometimes feel like I’m a slow-moving planet orbiting a stationary sun while other planets whizz by. Medellín is popular with digital nomads, people attending Spanish immersion courses, adults on sabbatical, etc., which means many foreigners are here for a few months and then gone. Meanwhile, the city in general is known for families and social circles dating back decades, cemented by the mountains’ isolating geography and the city’s enduring appeal. With 5.5 years in my pocket, I find myself in the in-between. It’s not a bad feeling, just somehow different.

The feeling has been more intense lately because a round of foreigner-friends all left in succession. These friends were made over brief periods of time, but nonetheless had significant impacts. Upon leaving, some of them generously gave me miscellaneous items – from clothes to plants to makeup remover – that they did not want or weren’t able to take back. So now, I write with Andrew’s pens (a serious upgrade from mine!), wash my hair with Megan’s shampoo, cook with Shruti’s spices, and water Andrea’s weird but beautiful little fruit tree. This jetsam is a daily reminder of how each person enriched my life. The growing web of contacts I have all over the world is my consolation for the immediate vacancies.

If I don’t underestimate my own rate of change, I’ll probably decorate next Christmas with garland left to me by a friend. For now, I accept my place in the middle – still a newcomer to my local friends (who never quite trust that I won’t jump ship), a long-term expat to my foreigner ones, and a sometime-connector between the two. It’s a weird place to be, but it’s home.

Now Available! Alone Together: Tales of Sisterhood and Solitude in Latin America 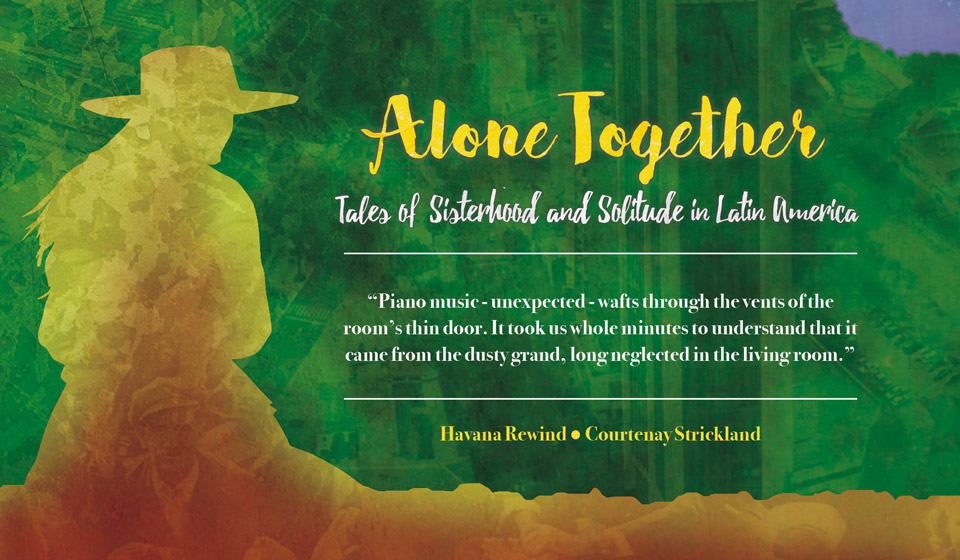 I am thrilled to have a poem in the about-to-be-released anthology, Alone Together: Tales of Sisterhood and Solitude in Latin America, which tells the real-life stories of multiple women’s solo travel. The book is a rush of emotions – joy, fear, sadness, love, and more. You can read an interview with me – about why I wrote what I wrote – on the Women Travel Latin America website. I can’t wait to read all the Alone Together stories and hope you’ll join me.

TODAY, 20 November 2017, is the last day to purchase your Kindle version at the special pre-order price. Tomorrow is the official release and the price will go up. If you purchase today, you get the discount and your book will be delivered tomorrow. I share this with you not because I’ll make money from the book sales – I won’t – but because I know we have a shared spirit of adventure and because I never cease to be grateful for your support of my writing. Thank you!

Because I am nothing if not a dreamer, I recently submitted a photo essay to World Nomads‘ travel photography scholarship contest. While I definitely didn’t expect to win (and win I did not), I learned a bit about photography and was inspired by the amazing entries from around the world. It’s worth taking a look at the winning entry and those that were short-listed (congratulations, all!). I’m reproducing my five-photo essay, below, along with a few bonus shots, all taken with my iPhone SE. Follow me on Insta at @courtenaystrickland for more. Enjoy! 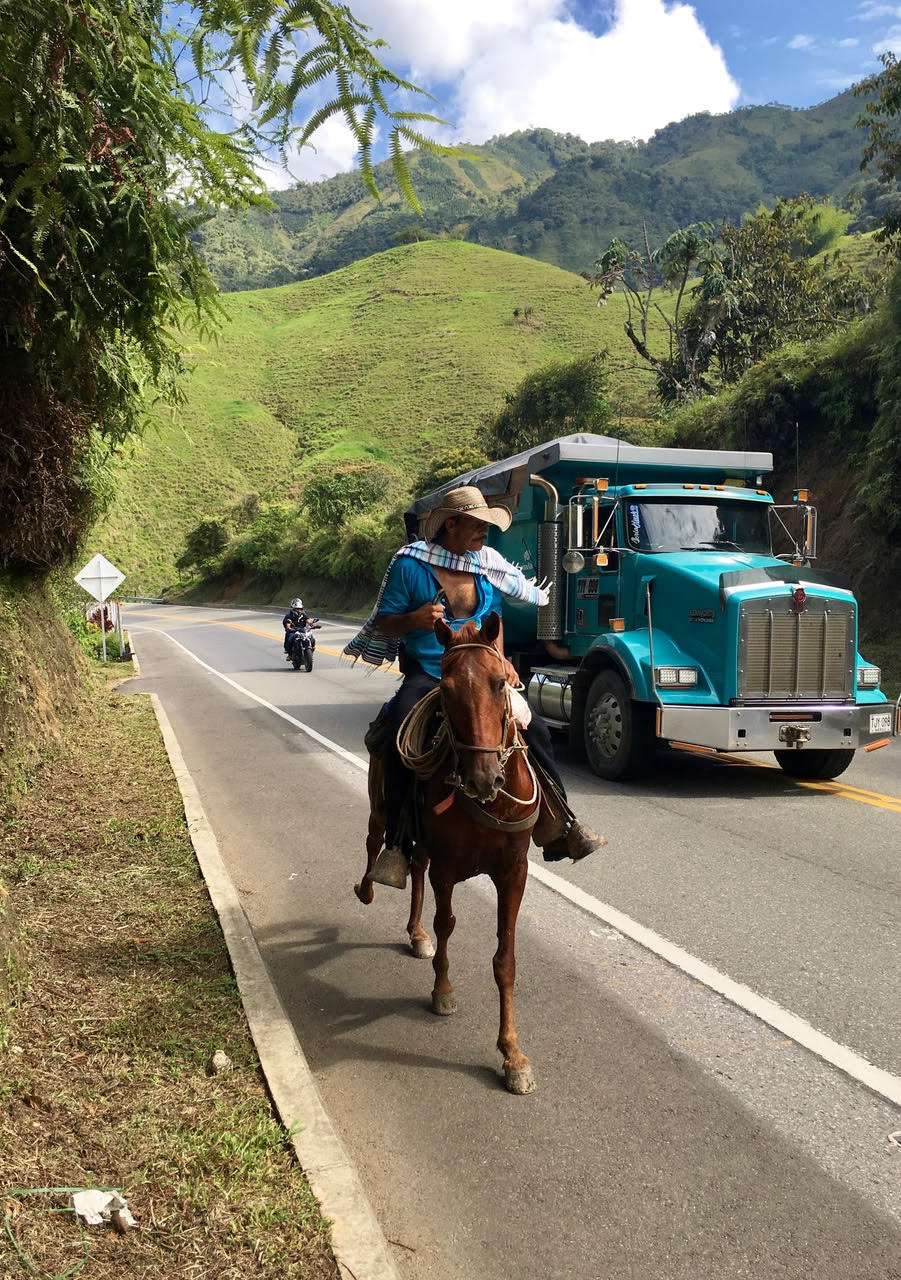 Sometimes it seems horses and motos frequent the Autopista Medellín-Bogotá nearly as often as the trucks for which it’s intended. As the two-lane passes through Antioquia, the Colombian state dominated by Medellín, it yields views of waterfalls and easy access to charcos, or natural swimming holes. 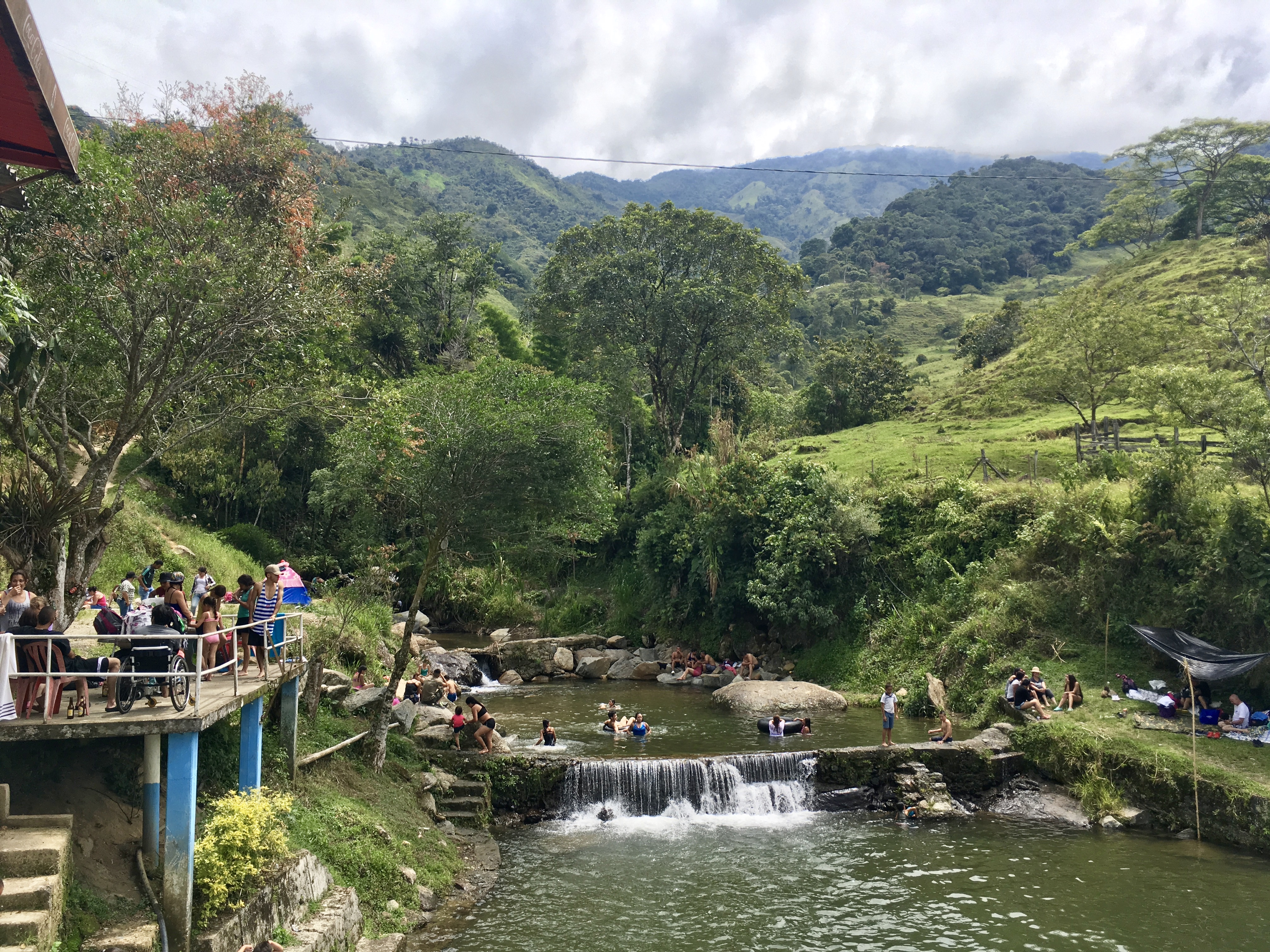 Past the Santuario toll (always much further past than the locals say), not far from Cocorná, lies the Hotel-Restaurante El Descanso. In the US, it would be only a truck stop – oil leaches slowly from the undercarriage of parked semi nearby – but here the adjacent charco makes it something more. 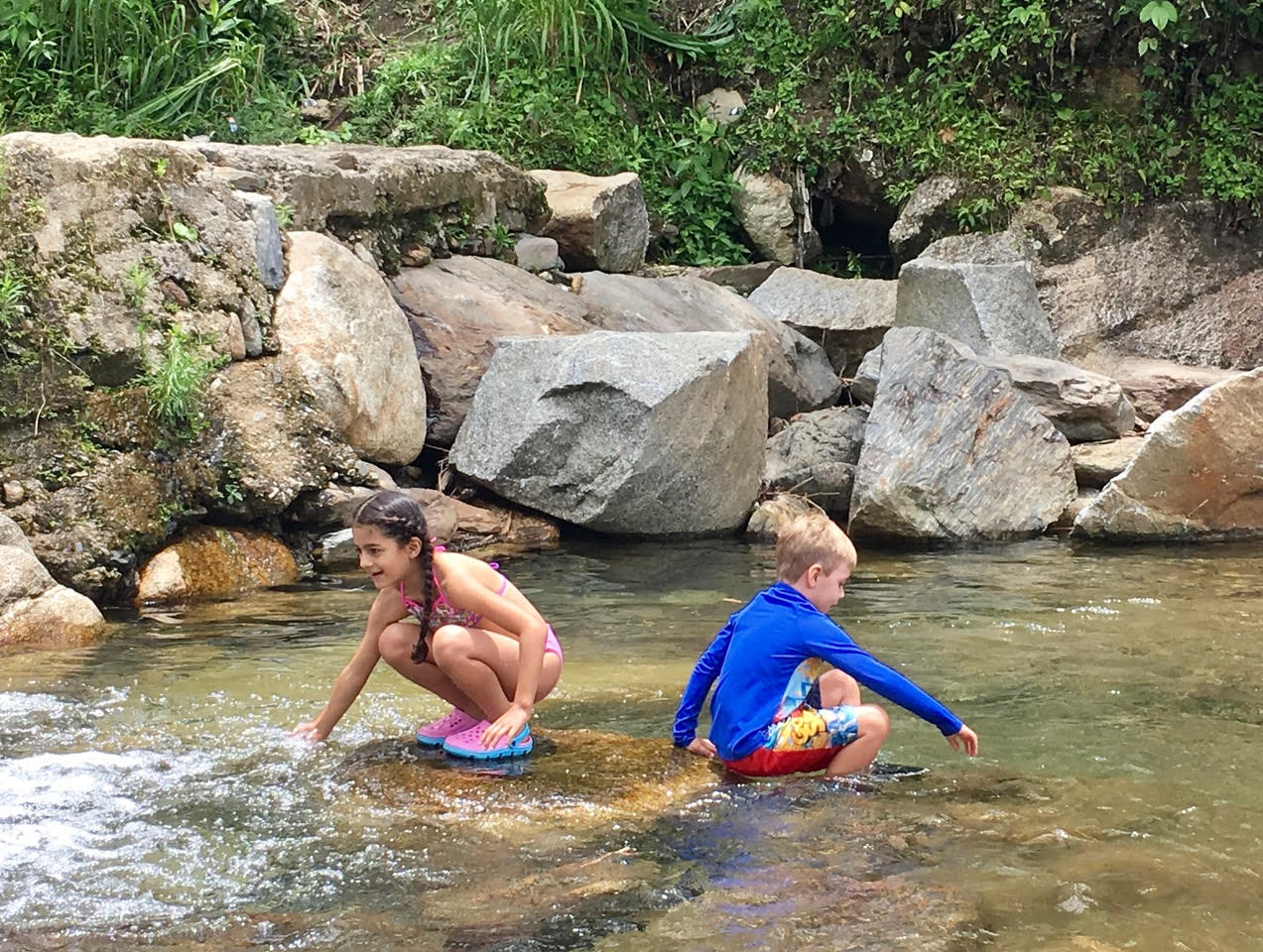 On weekends, locals gather to drink and chat by the quebrada’s banks and take dips in the icy cold waters. In the shallows, children splash and squeal; young men teach the newbies to skip stones. A very old man, unable to walk, lies on a grassy spot, wrapped in blankets and attended to by his wife. 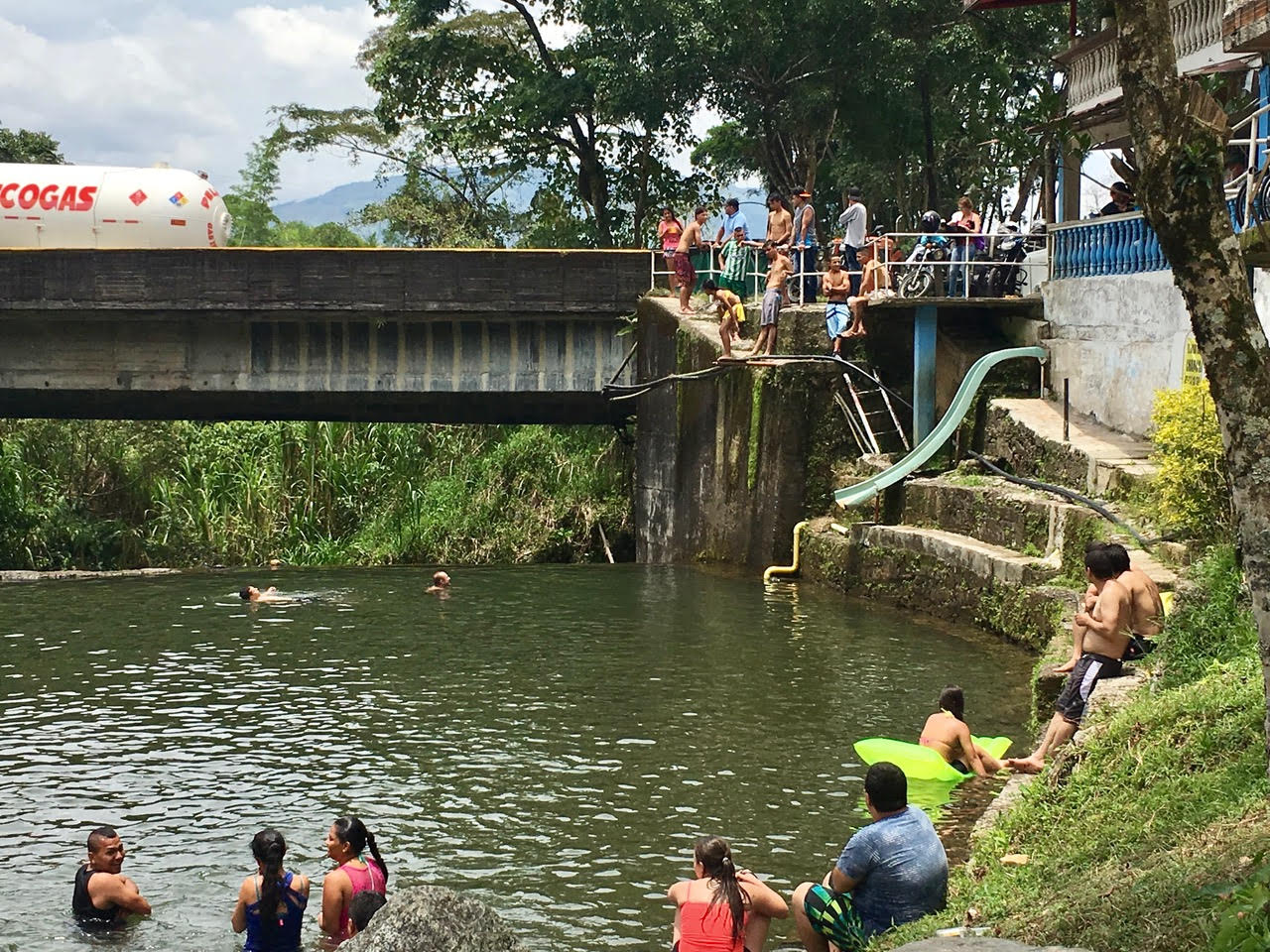 Young people congregate around the deep end and on the balcony of the tiendita above. A cracked pool slide remains installed in the concrete embankment. On the makeshift diving platform, a girl readies herself to leap as a tanker truck roars by. She backs away as those below yell encouragement. 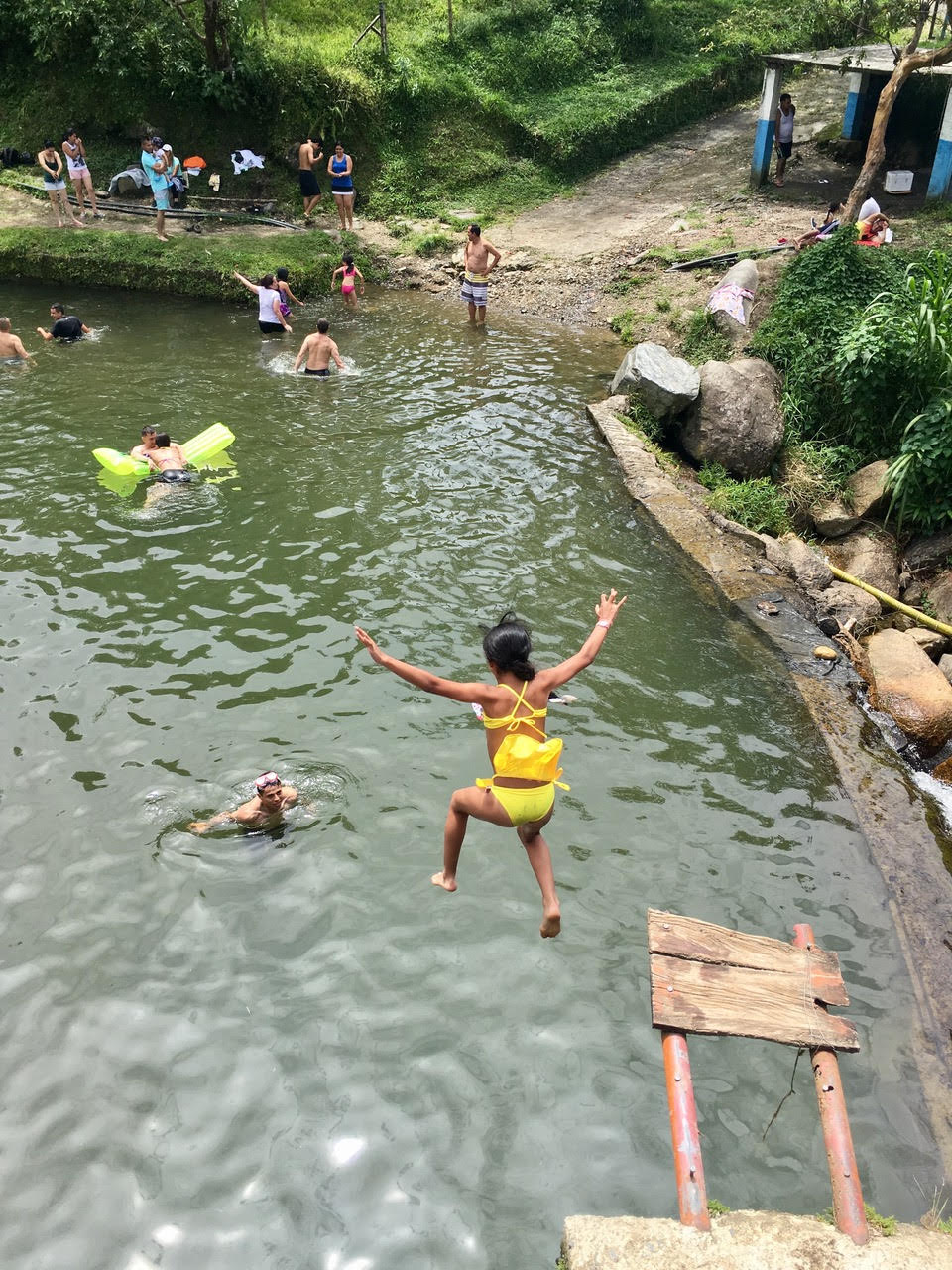 After several minutes of indecision, the girl is airborne. She doesn’t dive head first to meet her reflection, as some of the adult males have done, but she’s the youngest to make the attempt today. Those watching break into smiles as she surfaces.

BONUS PHOTOS – Photo contest entries were limited to five photos each. The photos below were not included. 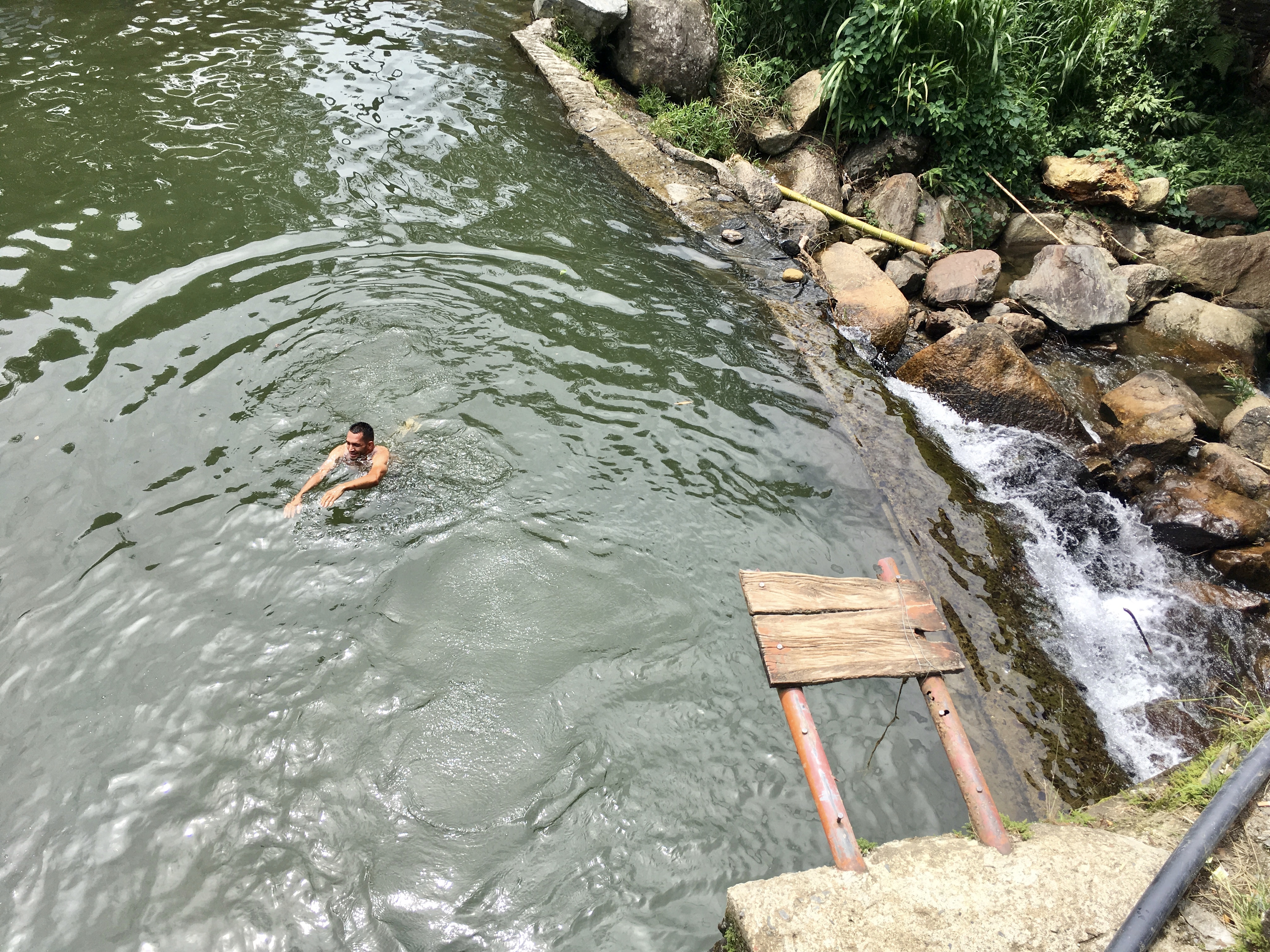 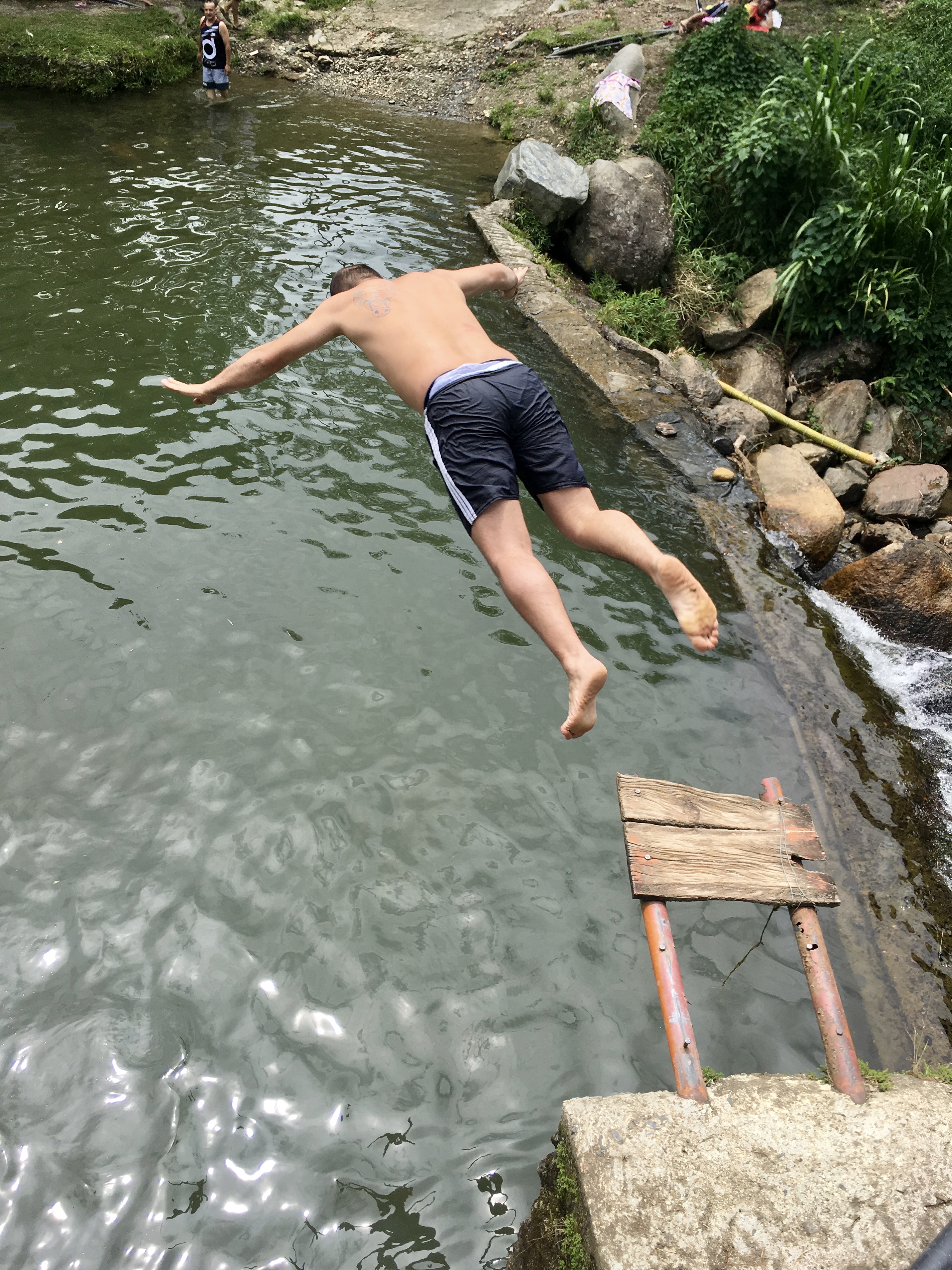 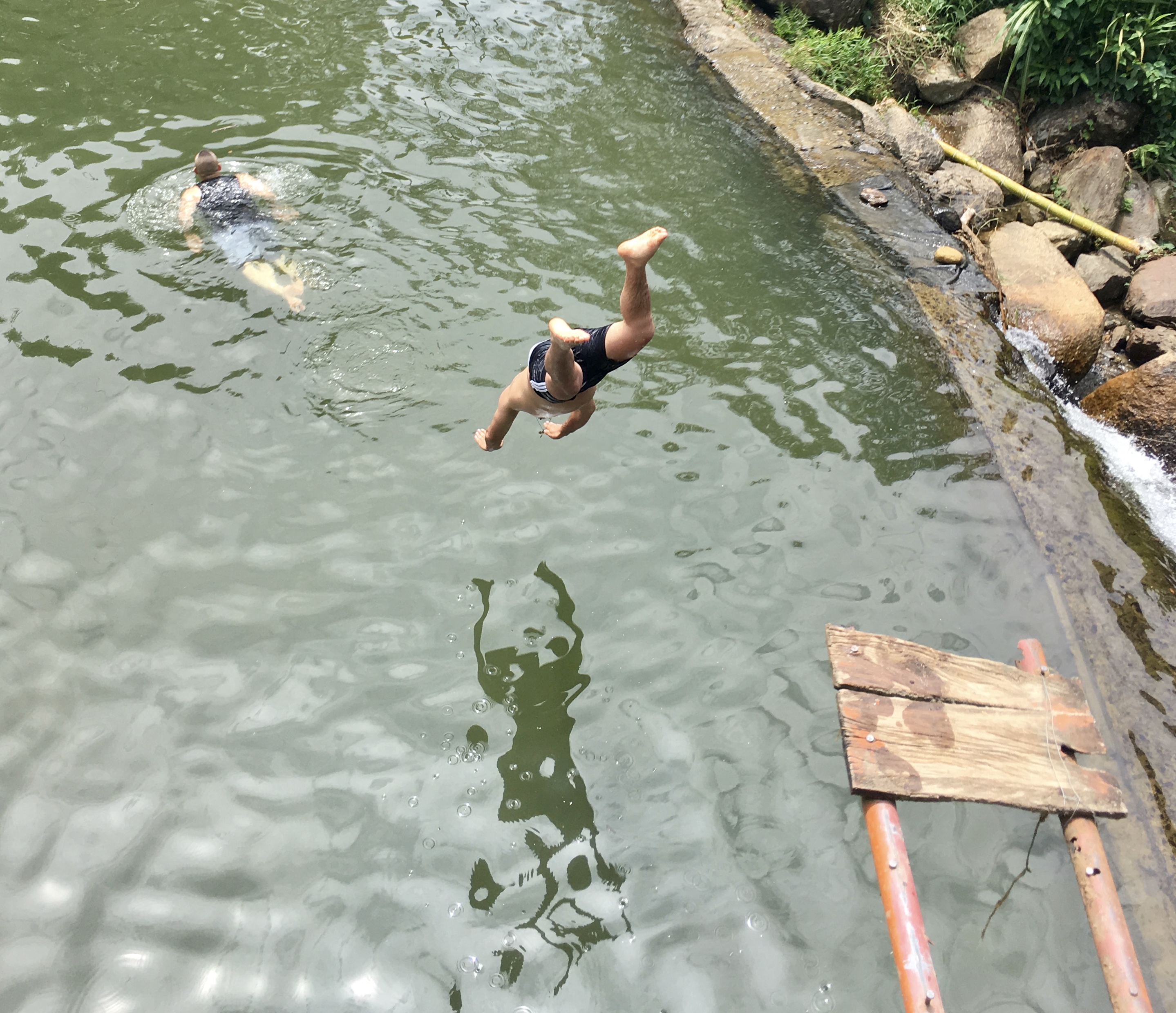 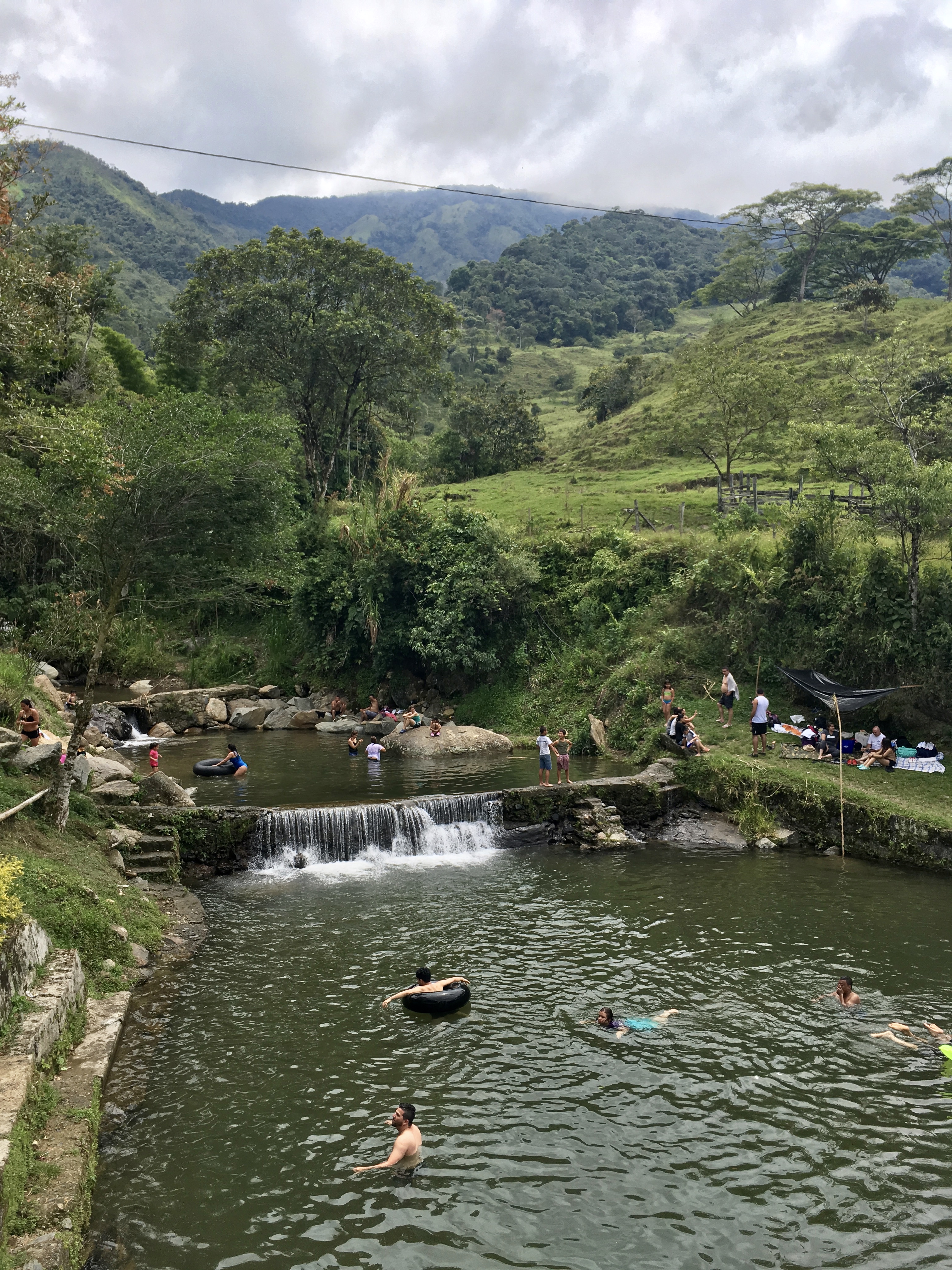 So… why did you move to Colombia?

When preparing to move to another country, no amount of info is too much! In the months before relocating to Colombia, I turned to websites, online forums, and blogs for an idea of what to expect. So when ExpatFocus.com contacted me for an interview, I said yes. The interview – read it here – gave me an opportunity to pay it forward to those whose shared experiences helped me. ExpatFocus.com also offers a lot of other destination-specific info – this Colombia landing page is an example. Thanks, ExpatFocus! 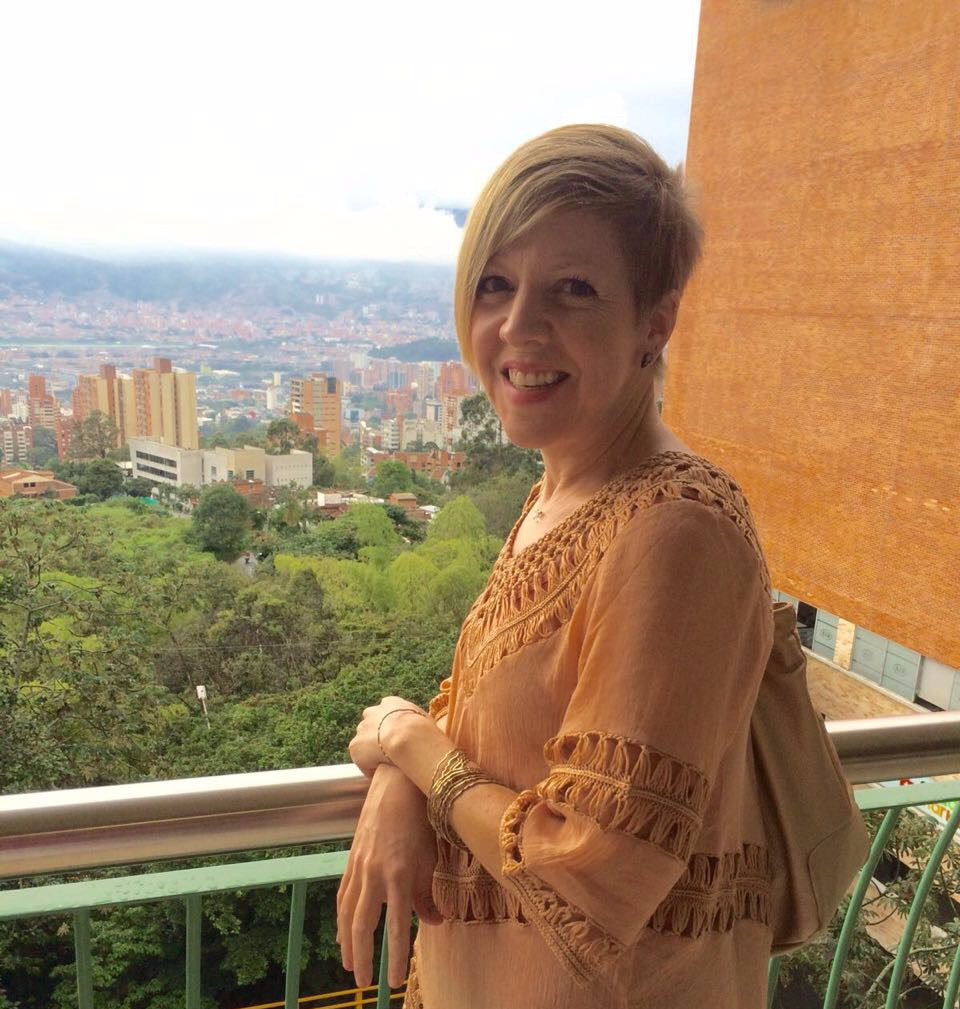 Author’s Note: I’m just now publishing some old essays. I wrote this post (various versions) between July 2015 and March 2016. It should be associated with that time period. The pic is also a throwback. I’m now approaching five years in Colombia. 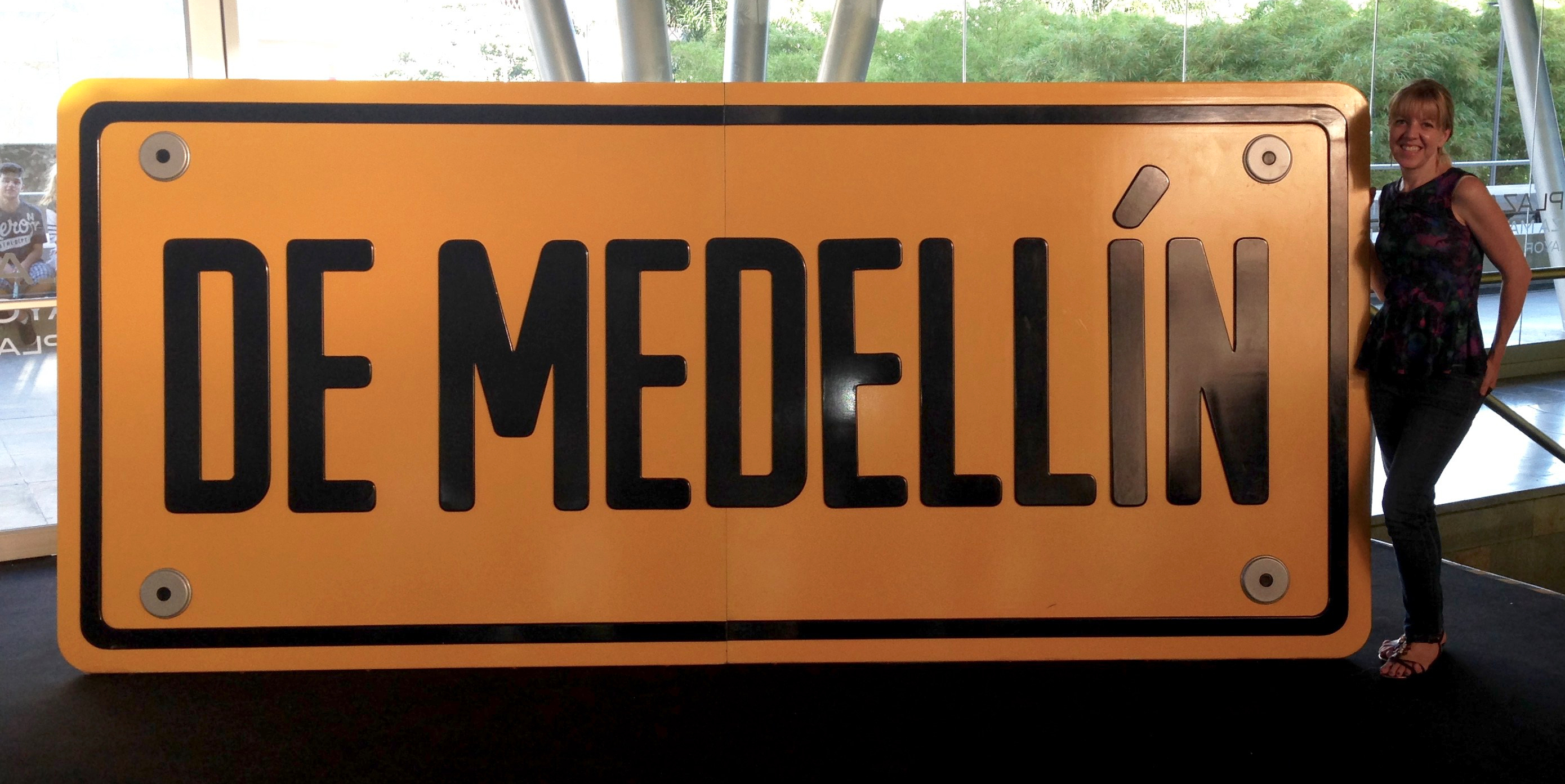 This is a blog post I’ve started writing three times – a post about what it means to be “all in”, living as a foreigner in Colombia with no plans to leave. I first began the post about a week before the three-year anniversary of my move to Colombia. For many foreigners I’ve talked to here, three years is often considered the dividing line between those who are in Colombia for awhile versus those who are in it for the long haul.  I thought it would be fun to mark the anniversary with a cheeky and hopefully insightful list of what being “all in” means – investing in furniture, buying a car, struggling through the process of getting a kid into private school here, and more. Together with my husband, I had done all those things.

And then, on July 23, 2015, the very date of my three-year anniversary here, my marriage – which had endured for years despite not being the most stable – disintegrated.

In the months that followed, I realized I had no idea what it meant to be “all in” in Colombia. The things I thought were markers of my assimilation meant nothing. It was no longer symbolic to me (how could it ever have been?) that I had ceased reverting to English when startled, that I had stopped pining for items from the US, that I no longer “translated” prices in my head. Even my apartment, which had begun to develop the layers that come from living or planning to live in a place for a long time, seemed like a shell – empty of the stability I had thought it represented. I now faced the daunting task of building a life in Colombia without a marital-style partnership and without relying on my husband’s cédula and other accouterments of citizenship. I needed to see if I could be single here, and single with a kid. I had to find out whether I could grow my business to a level that would allow me to save for a different future. I had to change everything.

My silly list of what “all in” means deserves the shredder. I wish I could tell you that my current situation is what “all in” looks like – it would be a great comfort to know that the gaming table of life has a limit – but it doesn’t. We calculate our risks (and our risk tolerance) as best we can, make our bets, and win some and lose some.

As for my writing, I have – temporarily, I hope – lost my voice, that elusive thing that is a writer’s stock-in-trade. With key pieces of my identity stripped away, my admonitions about leaps of faith – made in the belief that I had successfully made one – ring hollow. I’ve simply gone mute, the same as my one-year-old did for nearly six months when we first moved here. I find myself over open air, a child again at middle age, humbled by all I still have to learn, grateful for what may be the faint outline of solid ground on the other side.