A pictorial depiction of Guatapé’s motto.

A trip to Medellín is not complete without a side excursion to the nearby town of Guatapé. A one-day visit convinced me that the people who live there have committed completely to the Renaissance of their region. Their efforts have made Guatapé justifiably famous now as a tourist destination, rather than infamous as a dangerous region too close geographically to the power and corruption of former drug lord Pablo Escobar. The outer walls of houses in Guatapé feature brightly painted squares, or zócalos, that tell the stories of those who live there. Many zócalos feature the town’s symbol, a sheep whose stance depicts Guatapé’s motto: “caminando hacia adelante, mirando hacia el pasado” — walking forward, looking back. Grounded in a promise to never forget its history, the future of Guatapé looks very bright indeed.

Note: Many photos in the mosaic have captions. To read them, click on a photo to open the slideshow. Some photos don’t make sense without their captions. Thank you!

This sign in the town square explains the zócalos. It says in part, “An element of identity, the zócalo tells the story of an individual, a family, a past or a value of this friendly community conglomerate.” 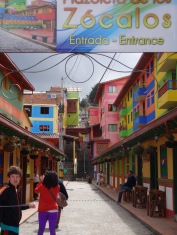 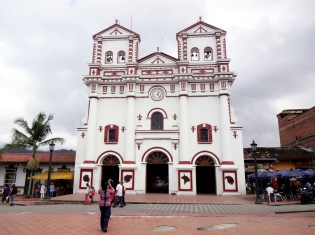 The cathedral in the town’s main square.

Even on a rainy day, this town shines bright. 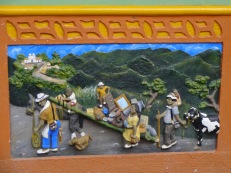 This zócalo depicts the displacement of a family during the drug-related violence that was so common to the region in the 80’s and early 90’s. 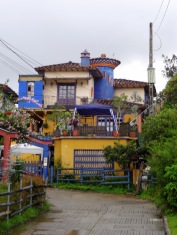 Some zócalos tell you about the person or business inside. These are on a home for the elderly.

The zócalos on the side of this hospital show the cycle of life from conception to death and the afterlife. 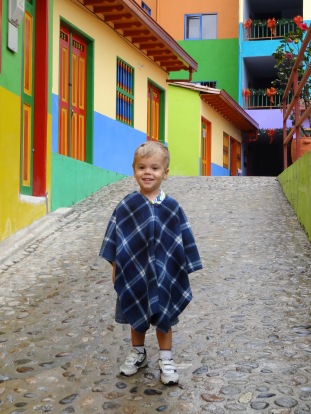 Marcello wears a ruana, a traditional cover-up for the sometimes chilly weather. 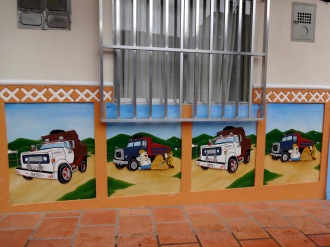 Not all zócalos tell of times gone by. Marcello was a fan of these pictures that decorate a trucking or construction business.

Antioquia, the state in which Guatapé sits, has a rainy season and we were in it. This awesome moto-taxi allowed us to tour the town and still stay dry.

La Piedra de Peñol (the Rock of Peñol), or El Peñon de Guatapé, is a natural rock formation that rises over 2,000 meters above sea level. Like an iceberg, supposedly the largest chunk of it is below ground. The locals told me it may have been a meteorite. This big hunk deserves its own post, coming later!

This cross marks the town of Viejo Peñol, which was flooded in 1978 to create the Peñol-Guatapé Reservoir that produces approximately 30% of Colombia’s energy. The town, originally founded in 1714, was relocated to a new spot nearby.

The man-made lake has given rise to many outdoor leisure activities – boating, fishing, zip lining, etc. – and to the return of posh urbanites who maintain luxurious weekend homes on its shores.

The bombed shell of La Manuela, one of drug lord Pablo Escobar’s most well-known estates.

The guides on our boat tour informed us that these holes in the hillsides lead to a series of tunnels. Pablo Escobar had them built in case he needed to make a quick escape – to his submarine. No kidding.

The nightclub that was part of Pablo Escobar’s estate, La Manuela.