Waiting for the boat that will take us to Playa Cristal

This past October, Gio, Marcello, and I took our first official family vacation. (Trust me when I tell you that moving to another country with your family does not constitute a family vacation.) We made the easy drive – about 1.5 hours northwest – to Santa Marta and its neighboring national park, Parque Tayrona. Santa Marta, founded in 1525, is the oldest permanent settlement in Colombia and supposedly the second oldest in South America. It is tucked between the Caribbean and the Sierra Nevada, the highest coastal mountain range in the world. 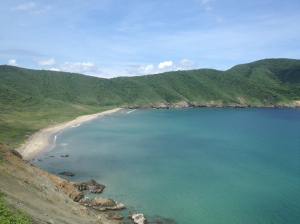 View from the road on the way to Playa Cristal

The national park is beautiful, with rivers and creeks, mountains and beaches.

Despite Santa Marta’s notable colonial history and neighboring natural resources, not everything I’d read about the city was positive. Some blogs, like this one by “Journeying Josh“, seemed focused on the decay and general disorganization of the city (maybe it was written at a different time). Other write-ups were directed only at those wanting to go to Rodadero, the pleasant but very touristy beach closest to the city. But what I found instead was a hidden gem – a city with a very small – just a few blocks – but vibrant colonial core full of people who recognize the potential and are helping shape it.

Gio, Marcello, and I stayed at La Casa del Farol, a tiny boutique hotel based right in the colonial center and run by a seriously cool couple from Spain – cool in that we-are-hip-and-young-world-traveling-entrepreneurs-who-are-still-super-friendly kind of way.

Within walking distance of the hotel were not only the couple’s tapas restaurant Made In Spain (delicious), but  a host of other tiny eateries with great atmosphere and some of the best food I’ve had in Colombia (sea bass with passion fruit glaze, anyone?).

The streets were narrow and charming in the way that only old colonial streets can be. When musicians settled in next to where we were eating at an outdoor table, I groaned, expecting some not very good hippie-ish music but ended up being seriously impressed (this minute-long video gets better as it goes along… turn up your sound and ignore the barking dog). In short, the place was still a little raw around the edges, but fantastically hip and edgy. People are seeing the possibilities, which is probably why it was a 2012 Travelers’ Choice Winner on Trip Advisor.

During the first day of our trip, we went to everybody-goes-there typical beach, Rodadero, which was nice but pretty crowded. This video – which does have a lot of footage of our baby – shows bits of the surrounding city and mountains:

On the boat to Playa Cristal

On the second day, at the recommendation of our innkeepers, we took a taxi ride to Parque Tayrona and then a boat to Playa Cristal, a wonderfully secluded beach in the middle of the park.

There, we were able to select our own fish for lunch, and Marcello played to his heart’s content in the pristine sand and clear water, resulting in one happily exhausted baby. 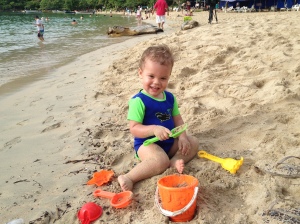 The views on the way to and from the beach were spectacular. And since the area where we went is only a small part of this big park, we can look forward to exploring more on future trips.

Now, I am a big fan of national parks. When I was growing up, my parents took me to nearly every national park (Glacier National Park in Montana is by far my favorite) in the United States during our yearly two-week summer vacation. I learned so much on every trip, and was completely wowed by the sheer beauty and diversity of the ecosystems and landscapes of the United States. So you won’t be surprised that I was thrilled to learn that Colombia has national parks, and that we live very close to Tayrona, one of the best.

Sadly – at least I think it’s sad, according to what I’ve read (I need to get more informed on this) – I recently learned that the Colombian government okay’ed the continuation of an privately run so-called eco-tourism project within Parque Tayrona, despite the fact that the company in charge of it had already been admonished previously for exploration in unauthorized areas of the park. (See this article in Spanish.) The company’s prior transgressions apparently threatened one of the park’s most sensitive ecosystems – the very type of system the park was created to protect.

Now, I’m not against all tourism development in national parks. You gotta have some if people are going to visit, and I have stayed at some wonderful places at U.S. parks, and also in protected ecosystems within Costa Rica. But the development has to be done right. It looks like the Colombian government has taken the bull by the horns in past years, rejecting at least one mega-hotel development. Here’s hoping they won’t turn a blind eye to any problems with the current endeavor. I’d like the park to still be as beautiful in future visits. In the meantime, I recommend you make the trip whenever you can.

7 responses to “Santa Marta and Parque Tayrona – Destinations in Transition”