Big Guys with Big Guns: My Take (What’s Yours?) 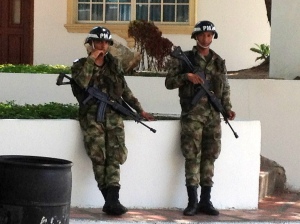 To be fair, these guys are outside a small military installation (I’m told it’s a colonel’s home) a couple of blocks from our house. They were very friendly.

Last week, my husband and I and our friend Scott took our usual Friday night trip to the movies at Barranquilla’s swanky Buenavista Mall. As is my routine, I stopped in the bathroom before the show. Coming out, I nearly ran slap into a big guy holding a really big gun – some kind of military-style assault rifle or semi-automatic type thing. (Can you tell how much I know about guns? It’s not much.) I jumped back, since this was not really what I expected in the middle of a nice multiplex movie theater in a very large, ultra-posh North American-style mall. I quickly realized that the movie theater offices were located near that particular bathroom, and that the guy with the gun was in the hallway probably because he and his partner were picking up or delivering a bunch of cash, á la Brinks in the U.S.

This was nothing I hadn’t seen before in Colombia. 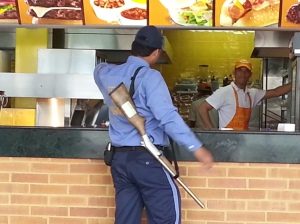 This private security guard is protecting the burgers at El Corral – or more accurately, all the cars parked in the garage below.

When my husband had to take several months of rent in cash from one bank in Barranquilla to another to put down the massive security deposit necessary to move into our apartment (that’s what happens when you have no credit history in the country you move to – see this Wall Street Journal article), the bank automatically outfitted him with armed guards for the walk down the street. Whenever an ATM is being re-stocked – invariably in the middle of the day when I need to get cash quickly – a guy with a very big gun stands outside the door until it’s done. Heck, I’ve gone in the Juan Valdez (like Starbucks, but with better coffee) when somebody awfully fancy must have been in there because big guys with big guns were posted outside each entry. At El Corral, a local burger joint, the security guard carries something that I prefer to think is an air rival or just plain fake (it kind of looks fake, right?). Even the church in our neighborhood had a big guy with a big gun posted outside the main entrance on Palm Sunday – a strange juxtaposition with all the dressed-up families entering to go to Mass.

I am not all that freaked out by the sight of guns, but running into the guy at the movie theater did lead me to think a little more about what the visible and routine presence of guns in a society means. (I am not even going to try to deal with the issue of concealed weapons, though I realize the implications of those are probably even bigger. Honestly, if people are going to have guns, I’d rather that I can see them.) I don’t think there’s one answer to the question; to me, it’s pretty clearly a case of “it depends.” It depends on the community itself, the current circumstances and past history, who has the guns, etc. But regardless, the fact remains that a routine show of heavy weaponry has some pretty strong implications – implications that people in the U.S. and U.S. politicians would do well to consider given recent tragedies like Newtown (my chest tightens to even re-read the news coverage), the defeat of gun control legislation, and the NRA’s insistence that more guns are the solution.

Among other things, guns mean power. Visibly displaying a big gun immediately and effectively conveys to most average folks that, regardless of anything else, the person holding the gun is powerful. As an American not accustomed to seeing very large weaponry on an average, uneventful day in places like movie theaters, this blatant display of power can be disconcerting to say the least. It tends to make me 1) fear the person holding the gun, and 2) question the overall safety of the environs in which I’m standing. I haven’t had the need for direct, daily protection through the routine display of big guns (as opposed to the protection that U.S. police and armed forces give all Americans daily, or the special measures taken under exceptional circumstances). During my lifetime in the U.S. locations in which I’ve lived, no one has had to routinely display major weaponry during ordinary daily life in order to keep the peace or provide protection. (Yes, I know that in some places in the U.S., such a display of weapons does occur regularly; admittedly, my own privilege has played a large part in mostly insulating me from this phenomenon.)

I realize, though, that my experience is not the same as others’ experience, and therefore my reaction to visible and routine displays of weaponry may not be everyone’s. I am often aware that the experiences of the Colombians among whom I live are very different from my own. Colombians younger than I can recall a period of regular violence and daily insecurity that makes me shudder. I have been in a condo association meeting here where residents casually spoke of that time, several years back, when some guys came in to assassinate someone in one of the apartments (this type of entry to assassinate was distinguished from other types of forced entry). I have learned the Spanish words for being stabbed and being shot because I’ve heard them more times than I care to contemplate. And I am sure that even given what I have heard, much goes unsaid about that difficult and dangerous time.

Fortunately, the years of extreme violence and insecurity – often referred to simply as “la violencia” (“the violence”) in Colombia – have passed. This recent CNN article, “10 Things to Know Before Visiting Colombia,” is right in stating that “drug culture stereotypes are false and offensive,” and that security in Colombia has improved by leaps and bounds. Honestly, I feel safer in my current neighborhood in Barranquilla than I did in the neighborhood where I lived in Miami. Three people I know were mugged at gunpoint in the latter. I’m grateful every day for the very acceptable level of security and safety that most of Colombia now enjoys. That being said, in contemplating the period of violence and this time of relative safety, it’s hard for me to know whether guns – undoubtedly part of the violence – were (and are?) also part of the transition to peace. It’s hard for me to know whether an average Colombian feels the same edginess that I do in seeing big guys with big guns, or whether he or she is instead comforted by knowing that the good guys have a level of control that they did not have before. I don’t know. I can tell you that I was glad the bank outfitted my husband with armed guards to walk that money a few blocks. There’s no question that sometimes it’s good to have power on your side.

For Colombia, guys – good guys – with big guns are perhaps (I hope) a sign of a positive transition – a transition from violence to a new period of peace and prosperity. I’d argue that the transition will be complete when such displays are exceptional rather than routine, when it’s simply not necessary to display major weaponry on an ordinary day in order to assure security. I’d like to live in a Colombia where we can go to church on Palm Sunday without the need for an armed guard outside, and I’m willing to bet that my neighbors would like that too.

That’s the world I grew up in in the United States. It’s also the world that the U.S. now stands to lose. The United States can make the choice to fight guns with guns – to do things like arm teachers in order to defend against rogue attacks – but to my mind, it will be a sure sign that there is something that we have lost. It will be a sign that we are losing our safety and security, and with it, some of our peace and prosperity. As countries like Colombia move closer to becoming the safe and prosperous society that has long made the U.S. the envy of the world, Americans will be moving away. Maybe we in the U.S. have already reached a point where such a sacrifice is necessary, but I hope and pray that we have not. If we do begin that transition, we’d better know exactly what we’re transitioning toward.

What is your experience with guns in daily life? Have you lived in a place where big weaponry was routinely displayed on ordinary days? If so, did it make you feel more or less safe? Did you see it as a sign of progress or of decline?

7 responses to “Big Guys with Big Guns: My Take (What’s Yours?)”